Ages ago now, I visited a guy call David Brandt in Ohio (and wrote about it). One of the things he showed me was this photo: 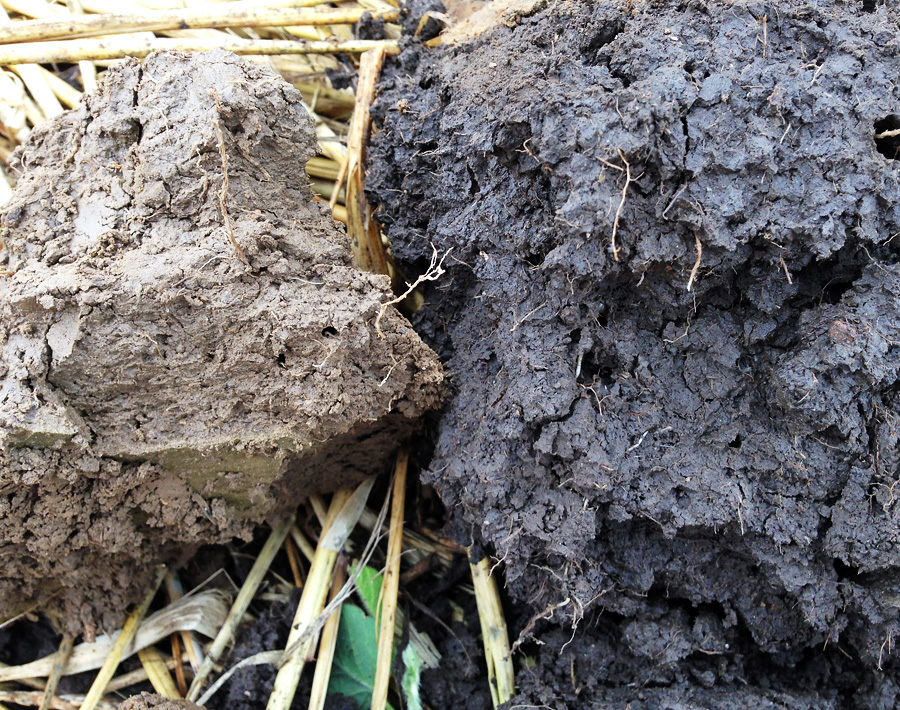 We dug these two lumps of soil up from adjacent fields. The bit on the right was from his original farm that he had been on for decades, whereas the left was a new bit of land he had just bought from his neighbour that year. As a very rough rule of thumb, the darker a soil the more SOM (Soil Organic Matter) it contains, and we all know that is a good thing. He claimed that it was possible to change his field on the left to the one on the right in about 5 years. I was amazed.

Later on I became more skeptical, as we had not taken the samples from a few metres apart, as would have been perfectly possible, but instead we walked maybe 100m for the second one. Did he know there were very different soil types there? I don’t know, maybe it was an innocent sampling error, maybe not.

Anyway, back to the real world. Back in 2013 I planted a herbal grass ley in one of our arable fields, and then grazed it for the next three years, using a technique called Mob Grazing. Very briefly, this means we moved the cattle every day onto a new piece of grass, and then left it a long time before coming back to graze it again – somewhere between 40 and 120 days. The idea, amongst other things, is that the plant roots can develop much more, which pumps more carbon into the soil. In a very rough sense, more carbon in the soil = more SOM, and we all know that is a good thing.

This autumn the experiment finished, and we have drilled some winter beans into the old grass, after it was killed off. This went really well, and the beans are, as I type, starting to emerge. Here’s a nice video showing the drilling in action.

We didn’t make much money from the cattle grazing, but it did have a positive margin – unlike some break crops in the last few years. However, the real return will come from any soil improvement that the grass and the grazing has given us…if it has done anything at all. Last week I was digging some soil sample in front of a camera (yup, glamorous), and we took one bit from the bean/grass ley field, and then walked about 10 m into the neighbouring field, which has been farmed “normally” for the past several decades. Most recently it was wheat, then a cover crop that has just been grazed by sheep. This was the result:

OK, so it is not as dramatic as the first photo from Ohio, but there is a clear visible difference. On the left is the bean/grass field, on the right the wheat/cover crop. Darker = more SOM, right? I had to find out, so I came back a few days later and, took some samples which were duly sent off to NRM for analysis. Before I started with the grass, both fields were around 3-3.5% SOM, so I would expect the wheat/cover crop field to still be around this mark. I’ve just got the results back, which are:

Wow! That is a great result, and way beyond what I would realistically hope for in three years. The water holding capacity increase alone in that would be of some serious value in dry/normal years, and then there is the increased nutrient availability as well. Amazing.

But hold on. The LOI test for SOM is a very crude instrument, and it measures anything that can burn, not just the valuable, decomposed, forms of SOM like humus. I did of course try to not include any bits of grass or root in my samples, but I still feel like the SOM % will probably fall in the bean/grass field in the next year or two as it stabilises. I’ll have to keep an eye on that, and do some wider measurements over the whole fields. I feel it would also be interesting to measure different depths, as theoretically my deep rooting ley should have put SOM further down the profile as well – this test was the top 10cm.

Of course, the only result that actually matters is the £s, and that will come later down the line as the cropping syncs up, and we see what happens with yields across all the fields. So come back in 5 years and I may have something truly interesting to report. Until then, Merry Christmas.

This site uses Akismet to reduce spam. Learn how your comment data is processed.